The following is a transcript (written by me) of a presentation of modernism (focusing on modernist texts and further research) to students at Northeastern University in Massachusetts. The included section is an introduction that, read alone, can provide a good preliminary overview of the wide-reaching, unifying theories of modernism as it applies to art, literature, architecture, and music.

A broad definition of modernism is “a style or movement in the arts that aims to break with classical and traditional forms.” The definitions of classical and traditional forms are flexible – not everyone would consider the end of tradition and the beginning of modern practice cross over in the same place, especially between different styles, but a common rule of thumb states that modernism spans the twentieth century. Influences begin as early as the late nineteenth century, and starts to fade in the late twentieth. At this point in 2016, modernism feels almost counterintuitively unmodern because of its firm roots in the twentieth century. Starting in the late twentieth century, modernism was overtaken by post-modernism, which is centered around a general skepticism in ideology, reason, and certainty. Since modernism was characterized by an optimistic, even utopian view of society and progress, post-modernism is cited as a reaction to it.

Modernism applies to countless styles across broad genres including music, painting, literature, and architecture. As you learn more about modernist styles in all those pursuits, it’s very easy to see connections and techniques mirrored between them. The broadness of modernism is one of its greatest assets because it promotes the synthesis of art across society.

In modernist literature, stories are fragmented piling-ons of obscure metaphors. Similarly, in early modernist paintings, impressionism becomes the dominant technique, in which indistinct pictures are represented with broad brushstrokes and leave more of an “impression” than an exact replication of the image. Modernist architecture is based on functionality and clean lines, resulting in buildings that look a lot like the ones on Northeastern’s campus. A lot of our architecture is inspired by Bauhaus (pronounced bow-house) styles, like the glass facade of Marino and the pops of color in Snell Library. Finally, in music, modernism takes many different approaches, the dominant one being atonality. Although atonal music still uses tones, it treats tonal centers differently or even ignores them, and develops new, coded systems that turn composition into a kind of mathematics.

(A Bauhaus gallery beside Northeastern’s Ruggles Station, photos by dannyinasia on photobucket and mapio.net respectively.)

The unifying factor between these styles is simplification. By removing extraneous efforts which supposedly only complicate or decorate, modernists reduce art to a science. Using these utilitarian methods, they prove to twentieth century society that reason and progress are beautiful, and provide access to deep truths.

Instead of only highlighting the beliefs of central writers of modernism, we’ll talk about pioneers in several different disciplines. Influential creators started discourse on modernism in many more forms than the written word.

In nineteenth century painting, Paul Cézanne started to flatten images into stacked planes and built form through expert use of tone. His art was very analytical and full of geometric simplification. He is credited with ushering the twentieth century into modernist art. In the twentieth century, the quintessential modernist painting style is cubism, and one of its central painters is Pablo Picasso. Picasso painted flattened images that explored objects from several angles at once. His subjects became surreal, but recognizable, which was valuable for demonstrating geometric forms in ways that may never have been uncovered by the naked, unanalytical eye. 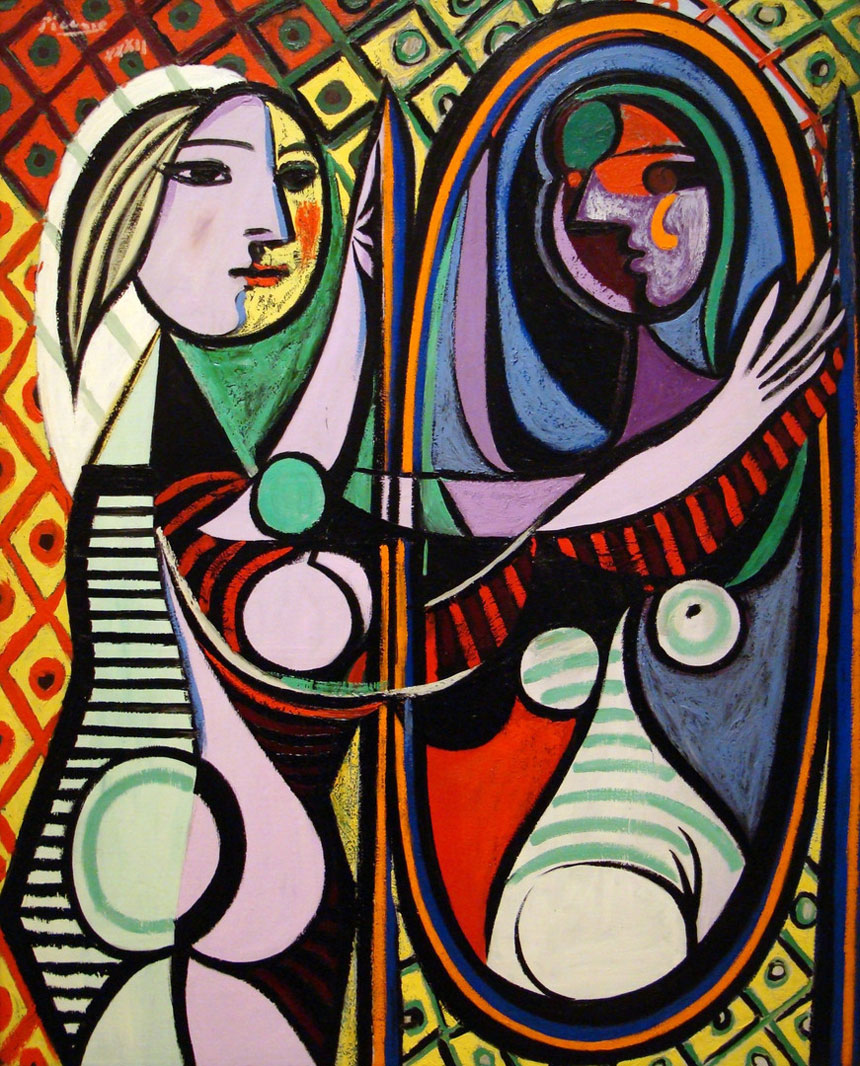 In architecture, the German art school called Staatliches Bauhaus was an authority on modernism, which ultimately aimed to unite all arts under one “total art”. While the school and its buildings were, themselves, the assertions of modernist doctrines, there is official documentation of its views and goals. Its founder, the architect Walter Gropius – who is also considered a founder of modernism as a whole – published the Bauhaus Manifesto, which explores the “total art” in more detail. The aim in the total art is to eliminate the “distinction between monumental and decorative art.” The Manifesto argues that traditional art resisted unity because it could not be taught, and theoretically solves the problem by valuing applied arts and considers careful utilitarianism a form of artistry.

In writing, Virginia Woolf is one of the best-known, most taboo modernist writers. Her stories are heavy and her reputation is intimidating, but her stream-of-consciousness tone is easy to follow and surprisingly delicate. The stigma of her outspokenness and mental illness makes her novels needlessly intimidating. In her experimental fiction the style changed from piece to piece, but the subject matter always centered around the mind. The appeal of her characters is that they’re completely average. This is a common practice in modernist writing. The quest for truth about the mind doesn’t occur on Odysseus levels. Again, for the modernist, simplification is key.